ZUSD is consuming all the liquidity in Babelfish contracts. 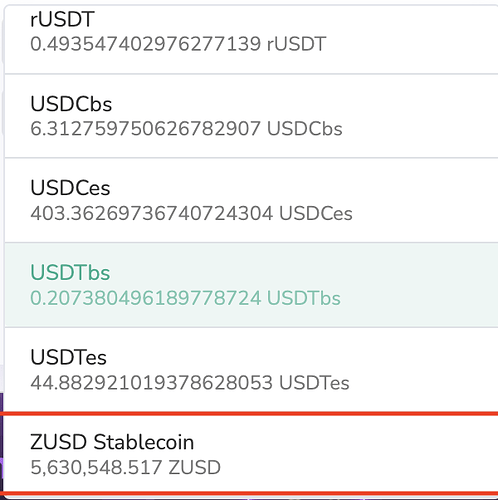 Currently, ZUSD makes up approximately 90% of BabelFish deposits, and this number has been quickly rising over the past few months. However there are very few venues available for ZUSD liquidity, increasing the risk that BabelFish ends up holding a disproportionately large amount of illiquid ZUSD and very few more liquid stablecoins such as BUSD, DOC, DAI, USDC, or USDT.

Need to recover liquidity in other tokens, and reduce ZUSD less to 40%. This is not only affecting Babelfish, but also the Sovryn Bridge. The main reason is the lack of a basic ZUSD complete economic flow.

Reason standing behind this decision is that BabelFish multisig signers are responsible for properly managing the stablecoin pools and potential risks, even before the appropriate tools would get approved by the BabelFish Community.

If anyone has questions or feedback about this decision or how it was made, we welcome discussion on this thread in the BabelFish community forum.

In general I do agree with You - except for some minor things.

The main problem with ZUSD is that it is not usable for most of the people on RSK - as You have called it lack of complete economic flow. Only those who received ZERO invitation, are able to swap XUSD for ZUSD and provide it to the Zero Stability Pool or to pay back their loan.

We do need liquidity and it is drained fast - and I do think that mostly by ZERO users. This could be checked.

We are constantly observing the XUSD composition and we are aware of the current situation. This is also a reason why ZERO invites are on hold.

Also for ZERO to succeed - we have to be able to provide what the most users need and are willing to use - that includes the centralized stablecoins too. Work on incentivizing mechanism is progressing, work on the new UI too, but maybe this is also a time to think of some kind of additional fees for certain stablecoins and no fees for those which are favored by the most.

Some months ago we had another - very similar problem. We have held over 75% of the XUSD composition in different forms of USDT. That gave us some headaches. IMO ZUSD does not present this kind of risk as any other stablecoins. ZUSD is backed by BTC and it is overcollateralized significantly - but it needs to have some more utility.

Really? ZUSD is a proxy contract. Is not secure.

@Arob - i’m not sure what you mean, but the type of contract is not insecure.

I would like to support this proposal as a temporary measure. I think it is in the interest of both communities and the entire ecosystem. Over time, more liquidity and sources of demand for ZUSD will come online. It would make sense to temporarily halt ZUSD deposits to give that liquidity time to come online.

Additionally, the launch of the Sovryn Dollar is around the corner and I expect it will mostly replace ZUSD in the Babel XUSD pool.

Babelfish and XUSD collateral are not at risk due to ZUSD. Unlike with rDOC, ZUSD is always redeemable for BTC. However, Babelfish pausing deposits will help reduce demand for redemptions and is a positive step in advance of the SOvryn Dollar launch.

Could You elaborate a bit more? What is unsecure in Your opinion?

All Zero protocol contracts, including the ZUSD contract, are upgradeable. Upgradeability does not make ZUSD any less secure than any other Zero contract - or the BabelFish aggregator contracts, which are also upgradeable.

Thank You Yago for coming here. It is always worth having feedback from You, especially since Zero is a child of Sovryn.

I agree that it would make sense to enable the Deposit Pause Feature for ZUSD. I wish we could do it by a BIP, but in current situation we can only apply the same solution as it was used in case of rDOC. It would definitely help with achieving a proper level of ZUSD in the aggregator.

We are slowly getting to the point, when we should discuss what would be the optimal desired amounts or levels of different stablecoins in the aggregator. Any ideas in this regards are welcome.

As for ZUSD being replaced by Sovryn Dollar or even only adding Sovryn Dollar to the aggregator would require a BIP to be put up to vote by the Community. Let’s hope that the staking contract will get fixed soon and we will be able to get to that. 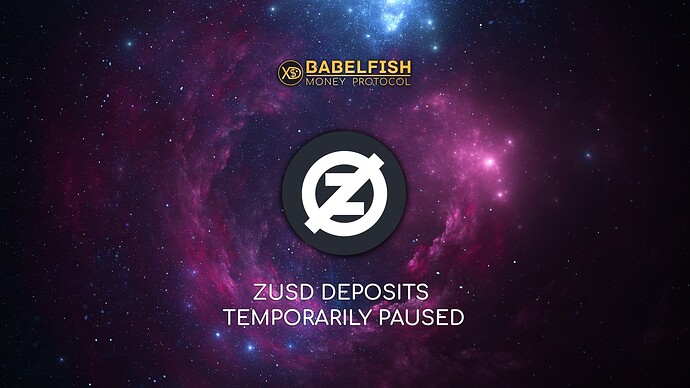 The amount of ZUSD in the BabelFish aggregator has reached ~92% of the total balance of stablecoins. The BabelFish governance multisig signers have decided to use the emergency deposit pause feature to temporarily pause ZUSD deposits.

As with the RDOC deposit pause, this is another important step towards proper management of the BabelFish stablecoin aggregator. Since the staking contract is paused and currently being worked on, we cannot implement the pause through the desired method of a community vote on the basket balancing incentive mechanism. While there are no other tools in place, multisig signers who are guarding the BabelFish protocol will be more hands-on in managing the aggregated stablecoins.

After the launch of the Sovryn Dollar (DLLR), ZUSD will be aggregated by Mynt — a bitcoin-backed stablecoin aggregator — to mint DLLR. The Sovryn Dollar will become the main stablecoin in the Sovryn ecosystem. This will generate additional use cases for ZUSD, which, at this moment, are limited to paying off loans, redemptions, depositing ZUSD in the Zero Stability Pool and converting ZUSD to XUSD. Recently, an increase in the exchange of ZUSD for XUSD caused a significant increase in the outflow of other aggregated stablecoins, mainly on the ETH and BSC networks. It will take time to recover liquidity in other stablecoins and reduce the amount of ZUSD in the aggregator, relative to other stablecoins. Withdrawals of ZUSD through BabelFish (converting XUSD to ZUSD) are still possible.

While the deposit pause is in place, ZUSD holders will be unable to deposit ZUSD into the BabelFish aggregator. However, they will still be able to deposit ZUSD into the Zero Stability Pool and potentially profit from liquidations on the Zero protocol. They will also be able to use ZUSD to pay off Zero lines of credit, or redeem ZUSD for RBTC using the Zero protocol. And as mentioned above, it’s still possible to convert XUSD to ZUSD using BabelFish (via Zero early access UI, and soon, the new BabelFish UI) to pay off Zero lines of credit.

From a risk management perspective, ZUSD is one of the safest and most censorship resistant stablecoins to hodl, as it is directly tied to bitcoin. It is significantly overcollateralized with sophisticated, yet easy to understand mechanisms to maintain its USD peg. But, from an overall liquidity and user perspective, we need other stablecoins in our aggregator.

We believe that ultimately this decision is in favor of all users of the Rootstock and Sovryn ecosystems.

Thanks for taking in consideration our proposal.