though I think long term stakers would get more voting power per FISH right?

Since our Governance is fork of Bitocracy - the longer You stake, the greater Voting Power You get.

I am in support of a token loss from early unstaking because I think it will discourage unstaking more than loss of potential gains (easy come easy go). I also think that this will provide more rewards to stakers, further incentivizing staking.

I think the purpose of staking is to acquire voting power based on how locked into the protocol you are. This makes sure that you have the protocol’s best interests. Because of this, I think there should be a penalty for withdrawing because it is more important for the operation of government to be controlled by people who are strongly aligned with the protocol then it is to maximize participation in staking.

I agree on this. The question is on weight of the penalty.

In future - staking might be also the key to participate in yield earned from the lent out collateral stablecoins. This could happen, when we would reach desired rBTC insurance pool.

Staking also may have fewer risks

There are a lot of people who would prefer staking over LP - just to avoid some LP risks.

Thanks @Illusivegoose - that is very nice feedback. Keep it comming.

Maybe NFT’s issued after certain timeframes such as staking for 6 months or 1 year, etc

Than is an interesting approach. That could be something additionally issued to the stakers.

@NOVAX - what do You think?

Voting Power, Yield, and Punishment
Below is an example of a voting power curve. We can start with the blue line with the largest shift in voting power from stakers of 42,000 to 4,200,000 FISH. This gives those with a large amount of FISH staked more voting power per FISH they have staked. For example someone with 42,000 FISH staked would get 24,000 voting power, whereas someone with 4,200 FISH staked would get 420 voting power. As the protocol becomes more stable, we can propose to shift the curve to the left (orange curve) to help decentralize the voting system. Also, there needs to be a multiplier for time staked (for example (1+ 0.1*months left staking). 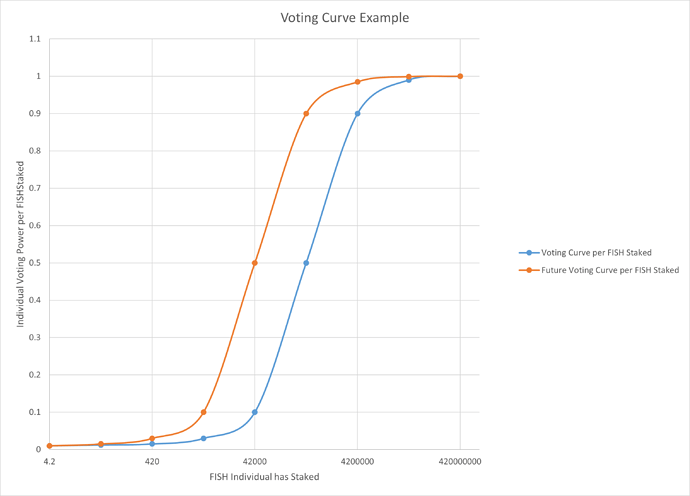 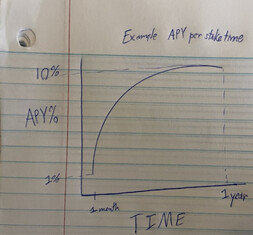 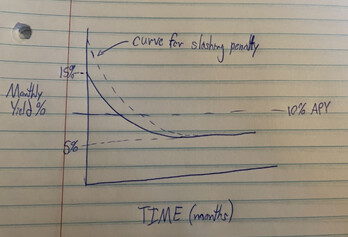 The curve on the left is the shape that a APY curve would look like based on staking time. The curve on the right shows how staking yield and unstaking penalty would work on a monthly bases. Initially reward is higher than APY, but decreases giving the APY as the average. This drop over time incentivizes stakers to renew their stakes early. The dotted line shows the penalty slash for unstaking early. The difference is the “price” for ill gotten voting power. My thought that the difference could be equal to the % of voting power a staker unstakes. For example, if it is a small amount like 42 FISH, maybe that is only 0.0042% of the voting power so the slashing penalty % would be equivalent to (month staking yield % + 0.004%). The penalty becomes more severe for those who unstake a larger portion of the voting power.

It may need some more thought, but does this model seem good?

It may need some more thought, but does this model seem good?

Looks interesting. It would have to be put in exact numbers to be implemented by devs.

We have to take into consideration also one thing - what would prevent people from using multiple wallets ? It is a lot of trouble, but I can imagine someone doing this.

Okay, here is a more specific model for the monthly yield and slashing penalty. The blue line is yield, the orange line is penalty considering staking time left, the gray line the penalty after adjusting with a multiplier for voting power (specifically 420,000 FISH in this graph). The multiplier is calculated with the equation y = 3.2*(x^0.42)+1, where x is the percentage of total FISH (420,000 → x = 0.001) 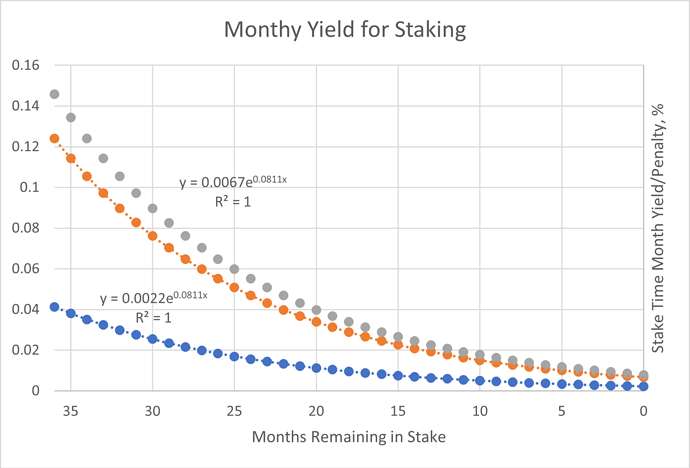 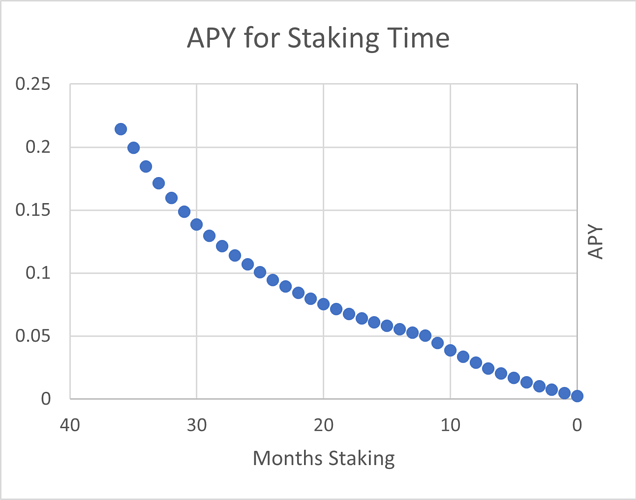 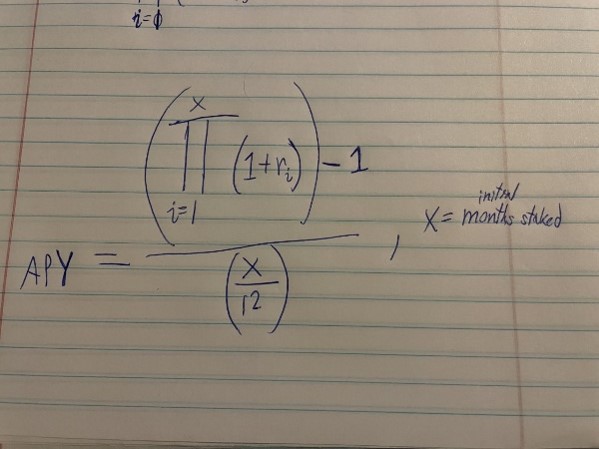 Here is a series of voting power distributions that we could use at different stages of community growth. 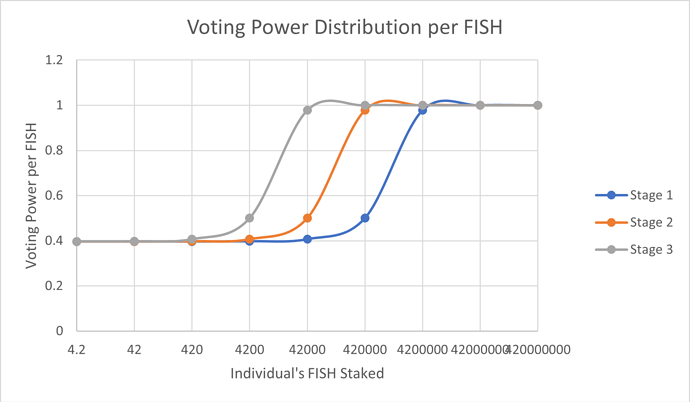 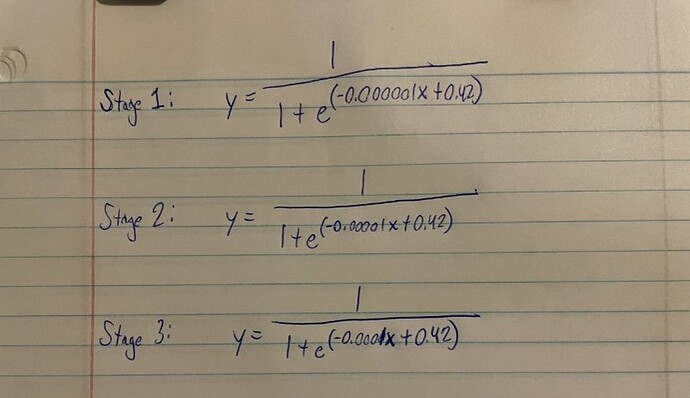 what would prevent people from using multiple wallets

Can you elaborate on the concern of using multiple wallets?

Can you elaborate on the concern of using multiple wallets?

If voting power is going to be limited for big wallets, they could transfer a portion of the FISH to other wallets and use those to vote. That is what I have meant.

Since we are using fork of Bitocracy - at this moment - we have the same settings when it comes to Staking Penalties. Not sure about Staking rewards - as for testing purpose I have staked a very small amount.

Sounds good. Does the dev team directly interface with the forum? Can they elucidate how staking rewards are set up?

I think that they could - but they are busy doing their job. They have a lot to do at the moment.

@Dante this is along the lines of what I was thinking.

@Hyde The deterrent against unstaking and restaking to game the system would be that there would be no benefit only additional cost.

@Harjo YES! Quarterly Governance Staking NFT Rewards which have in-game utility in BabelVerse. We have many functionalities we can associate with a query to authenticate a user’s NFT holdings.